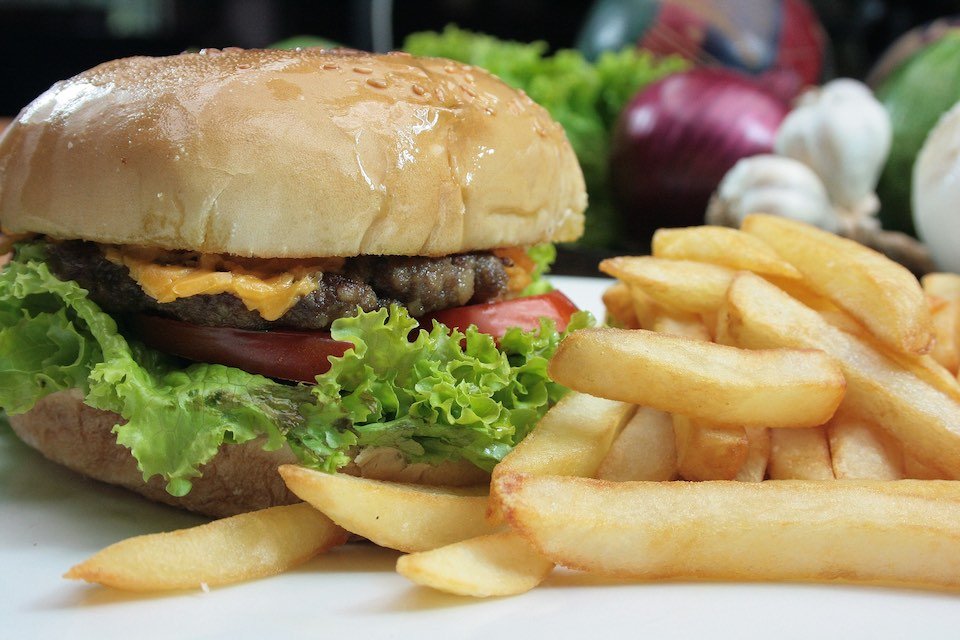 Posted at 22:05h in eCommerce by Anna Battrick
2 Likes

Would you like some fries with that? The changing face of Canadian Department Stores.

In order to survive the new retail landscape, retailers must innovate and bring new ideas in order to compete with pure online stores. They need to bring the instore experience to the next level. One of those ideas we examine below which is the introduction of food at the stores. This is a great idea as hungry shoppers might just come for a burger but leave with a new coat.

This week we present The Bay online store review to see: how well the site performs, how easy it is to make a purchase and whether the price is right. You can read all about our eCommerce sites review framework and evaluation methods in this article: https://www.eradium.com/quality-of-ecommerce-websites-5-most-important-factors/.

Although restaurants were once common in downtown Canadian department stores, the flight to the suburbs resulted in fewer in-store restaurants in newer mall-based locations. Many of Hudson’s Bay’s current locations, for example, lack fine dining options, resulting in these stores becoming pure shopping destinations. Although Hudson’s Bay recently introduced some exceptional food options to its downtown flagships, most suburban locations continue to lack prepared food and drink options. Sears Canada is another example of a department store chain without restaurant and café options, instead focusing on selling merchandise and services.

Retailers in Canada that make the most money

In fact, according to the International Council of Shopping Centres (yes, that’s a real thing), sales at Canadian malls averaged $673 per square foot of retail space over the past 12 months, up 5.8 percent from a year earlier.

In fact, according to the International Council of Shopping Centres (yes, that’s a real thing), sales at Canadian malls averaged $673 per square foot of retail space over the past 12 months, up 5.8 percent from a year earlier.
That compares to US$475 per square foot in the U.S., which means that adjusted for currency, Canadian retailers sell about 12 per cent more than American retailers per square foot.

According to data compiled by commercial real estate agency CBRE, Vancouver’s Lululemon had the highest sales per square foot of any Canadian retailer in 2013. It raked in an impressive $2,961 per square foot, or four times the national average.
But that pales in comparison to Apple, whose popular (and pricey) electronics mean its stores earned a massive $7,241 per square foot. No wonder Apple is the world’s most valuable company.

So who had the lowest sales among Canadian retailers? That would be Target Corp., which earned a sad $98 per square foot. Ouch. Can’t blame them for packing up and leaving.
Check out this chart of the retailers in Canada that make the most money. Data from the Centre for the Study of Commercial Activity (CSCA), via CBRE. (2)

Hudson’s Bay (formerly and still colloquially known as The Bay) is a chain of 90 department stores that operate exclusively in Canada. It is the main brand of Hudson’s Bay Company (HBC), North America’s oldest company. It has its headquarters in the Simpson Tower in Toronto. n French, the chain is known as la Baie d’Hudson (formerly la Baie), short for “Compagnie de la Baie”. The chain uses both the English and French versions of the name in some parts of the country.

The stores are full-line department stores, with a focus on high-end fashion apparel, accessories, and home goods. Price points at Hudson’s Bay are comparable to U.S. retailers Lord & Taylor, Bloomingdale’s, and Nordstrom. The average store size is 135,000 square feet (12,500 m2).

Flagship downtown stores are located in Canada’s largest cities, Toronto, Montreal, Vancouver, Ottawa, Calgary, Edmonton, and Winnipeg, often being multi-storey, historic buildings and carry an extensive range and selection of goods than regular Hudson’s Bay stores. The largest of the flagship stores is the Toronto store on Queen Street, at about 1,000,000 square feet (93,000 m2). Toronto has another smaller store along the Mink Mile at Bloor Street East and Yonge Street in the Hudson’s Bay Centre. (3)

You also can read our review about The Bay marketing campaigns in one of our previous articles:
https://www.eradium.com/discounts-and-coupons-in-ecommerce-email-marketing/

Our evaluation framework takes into consideration the following five factors:

Features and functionality that create an ideal shopping experience for consumers.

TheBay.com store runs on the IBM WebSphere Commerce platform that is one of the top 3 in the Gartner ‘s E-Commerce Magic Quadrant for March 2016.   The user interface design is not optimized for the touch screen  and it is not mobile  friendly.

The website desktop speed performance is close to the industry average but it is slower than 50 leading eCommerce and self-service websites.  The web pages speed is below the average on mobile devices.

The site is not mobile friendly at all. The main navigation items are not easily clickable, fonts are small and hard to read. The site is not responsive or has a separate mobile interface. 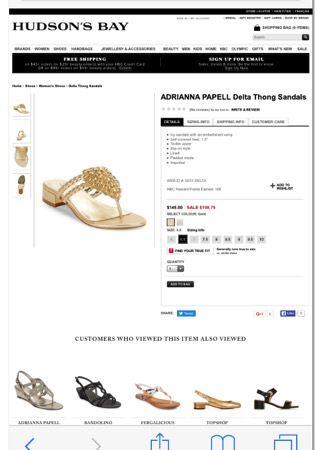 The search is not easy to navigate. It displays too many categories and very few filters in order to find what you are looking for in the shortest amount of time. 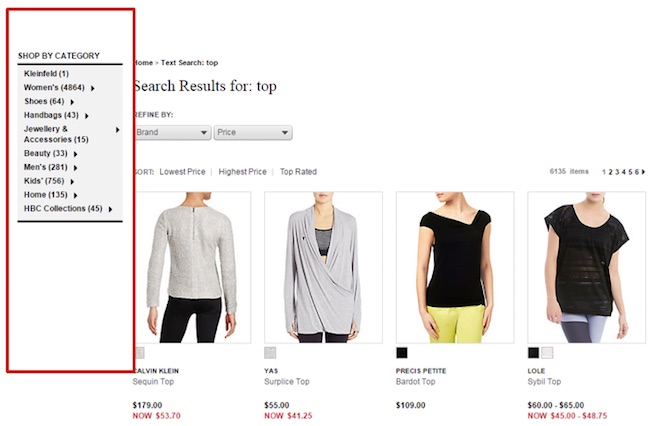 The site features Basic Zoom functionality that allows having a closer look at the product when using the mouse-over functionality.

Very useful information about sizing included. It allows selecting a size based on your previous shopping. This is one of the best tools for clothing as often sizes vary from one manufacturer to next.

There are only the products that viewed by others. There is no intelligent filter that recommends products. 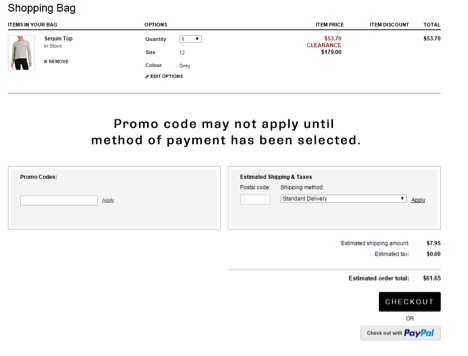 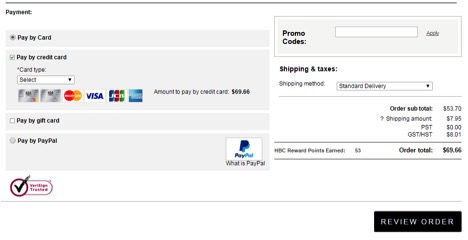 There is a large variety of payments available to please the different types of buyers.

There is a security certificate indication on the checkout process.

You may sign in for your Order History at any time. Information about your open orders, tracking, and past orders are available.

Easy to view and purchase past products.

You can select what type of products you are interested in receiving communication from, such as beauty, men, etc.

A retail website must be easy to navigate and help visitors find relevant information quickly. Knowing your audience is the key to creating an effective site by combining the right elements that appeal to your shoppers. 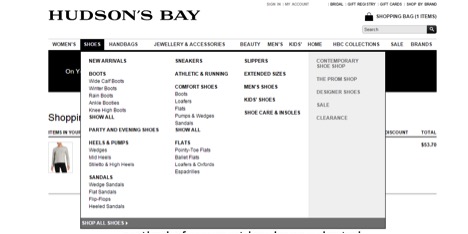 The contrast is low between the navigation items and the drop menu. Some of the menu items  are in the gray font on the light gray background are low contrast and hard to read.

Alternate Views are very basic, most products do not even have more than one view.

There is not enough visual contrast to bring the shopper’s attention to various important messages through the site. The site mostly uses variants of gray fonts and buttons, without any areas that stand out.

There is no consistency to the product shots. Some images are with models, some do not show their faces and some are just product shots. 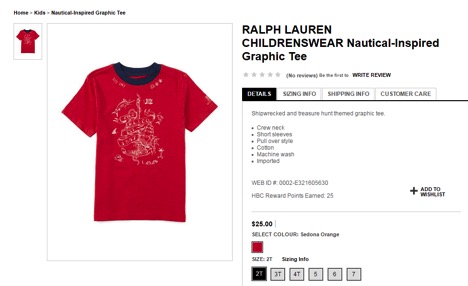 The quality of images is average but due to lack of consistency there is not unified look to the product images.

The site has very basic functionality, basic sharing through Tweeter, Google+,  and Facebook.

This functionality is not present on the site.

Are well done, has sizing and age for all the reviews. It also allows the user to filter the reviews based on these criteria so that they can only read the reviews relevant to them.

It is difficult to find. Use has to find a link to another page that features the phone number.

It is critical to have a variety of products that you specialize in, whether it is a specific category or type of product.

There is the basic control for color selection on the product page.

There is the basic control for size selection on the product page. There is no clear indication if the products are in stock or not.

Is it Amazon Competitive? 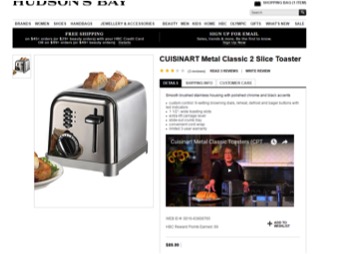 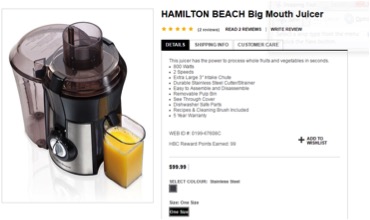 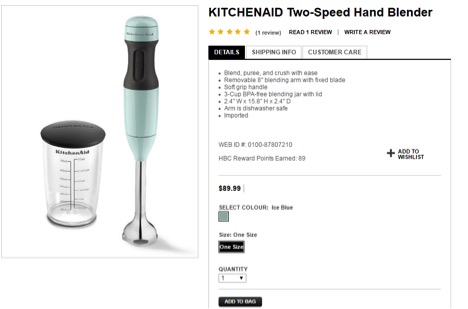 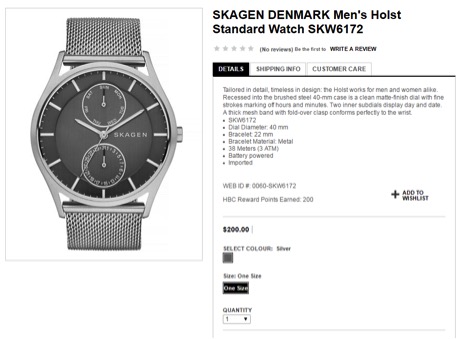 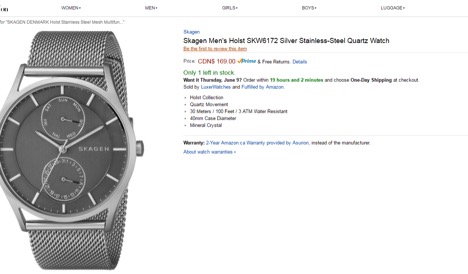 The site is very basic for a leading department store in Canada and does not impress. It does not have any of the modern features such as the in-store pick-up or even a proper mobile store. This site would have been leading edge in 2006.