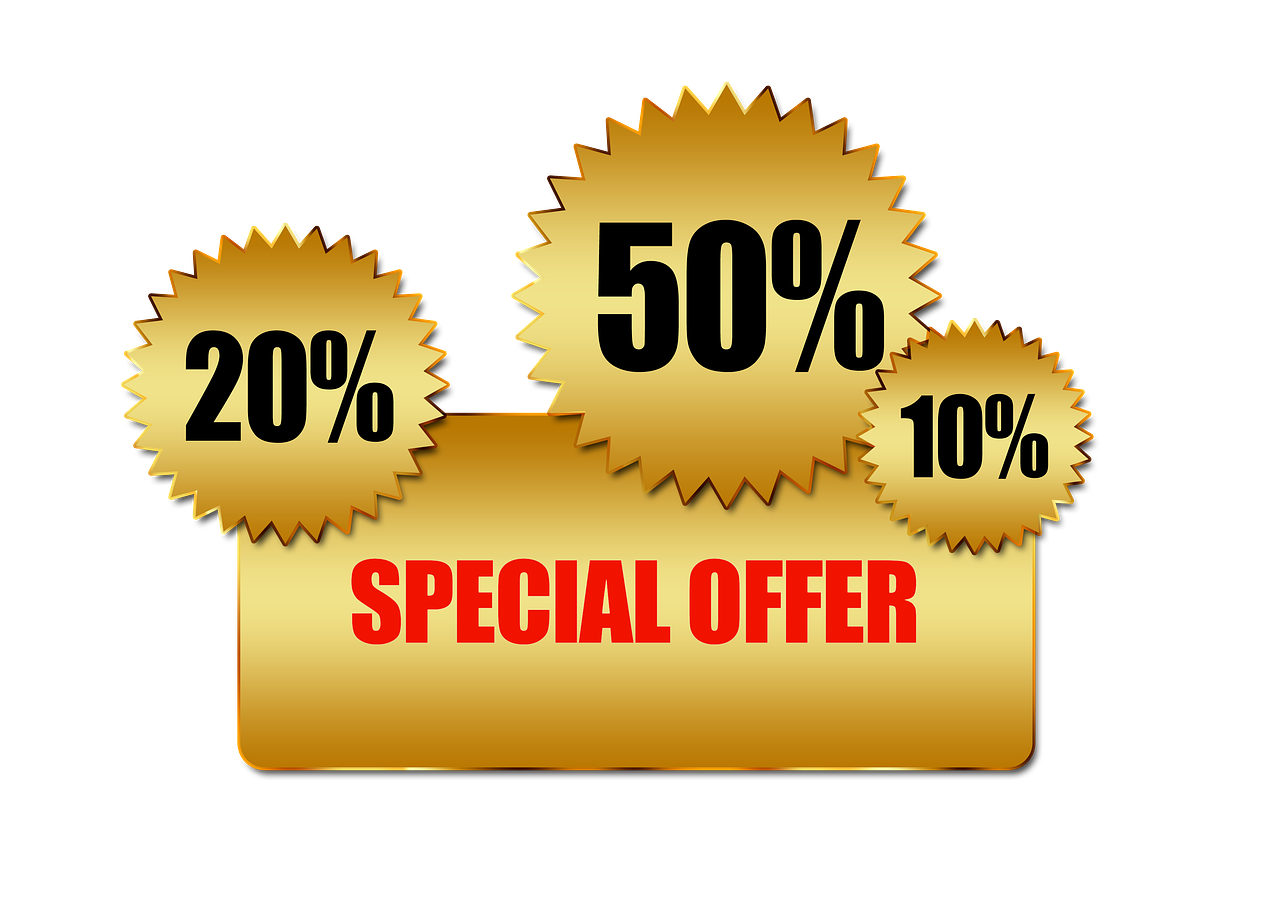 Posted at 00:57h in eCommerce, Omnichannel Marketing, Shopper Marketing by Anna Battrick
1 Like

The focus of this week spotlight is on the role of promotional discounts in eCommerce email marketing.

As we discussed in earlier articles email has the highest ROI among all media channels. (https://www.eradium.com/ecommerce-marketing-tools-email-spotlight/) To get the value out of the email marketing, you must continually grow and keep you subscriber list up to date.

Offering an incentive to subscribe increases the opt-in rate by 61% but surprisingly only 35% use it. (1)

One of the big resistances from retailers is the fear of one-time purchases. How to make sure that shoppers do not unsubscribe after getting the initial discount? Making the regular communication interesting and engaging, plus making the shopping experience delightful will keep your audience willing to receive your emails. Do not be afraid to lose them; since on average a list loses up to 30% due to inactivity, email changes, etc.  It is important to get new subscribers regularly to avoid your opt-in user base reduction. (3)

THIS WEEK WE ARE REVIEWING ECOMMERCE EMAILS FROM THE FOLLOWING RETAIL BRANDS: ADIDAS, MACY`S AND SPORT CHECK

Adidas AG (German pronunciation: [ˈadiˌdas]) is a German multinational corporation that designs and manufactures sports shoes, clothing and accessories. The company is based in Herzogenaurach, Bavaria, Germany. It is the holding company for the Adidas Group, which consists of the Reebok sportswear company, TaylorMade-Adidas golf company (including Ashworth), Rockport, and 9.1% of FC Bayern Munich. Besides sports footwear, Adidas also produces other products such as bags, shirts, watches, eyewear and other sports and clothing-related goods. Adidas is the largest sportswear manufacturer in Europe and the second biggest in the world, after Nike.

Adidas was founded on 18 August 1949 by Adolf Dassler, following a family feud at the Gebrüder Dassler Schuhfabrik company between him and his older brother Rudolf. Rudolf had earlier established Puma, which quickly became the business rival of Adidas. Both the Adidas and Puma companies still remain based in Herzogenaurach, Germany to this day.

The company’s clothing and shoe designs typically feature three parallel bars, and the same motif is incorporated into Adidas’s current official logo. The company revenue for 2012 was listed at €14.88 billion. (4) 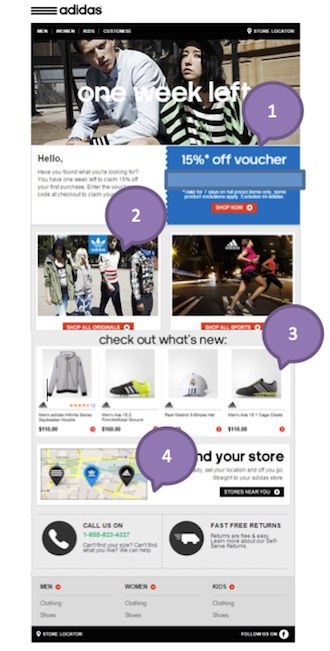 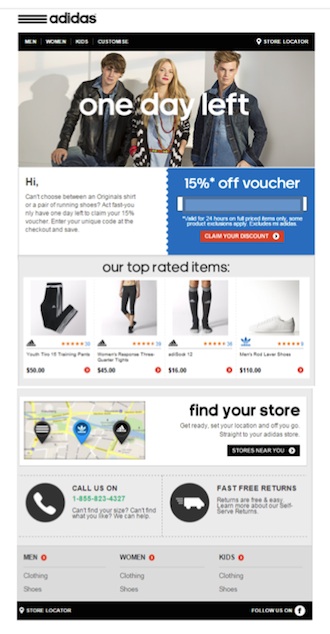 Adidas implemented one of the best introduction and purchase driving campaigns that I have ever seen. It has it all: flawless email template, urgency and great messaging.

What makes this the best campaign?

Macy’s, originally R. H. Macy & Co., is a mid-range chain of department stores owned by American multinational corporation Macy’s, Inc. It is one of two divisions owned by the company, with the other being the upscaleBloomingdale’s. As of January 2014, the Macy’s division operates 789 department store locations in the continental United States, Hawaii, Puerto Rico, and Guam, including a prominent Herald Square flagship location inMidtown Manhattan, New York City.

Macy’s is known for its niche in popular culture and the diversity of its merchandise. Most locations compete with Belk, Bon-Ton, Dillard’s, Kohl’s, JCPenney, Boscov’s and Sears; upscale locations compete withNordstrom, Neiman Marcus, Lord & Taylor, Saks Fifth Avenue and Von Maur. Macy’s has conducted the annual Macy’s Thanksgiving Day Parade in New York City since 1924 and has sponsored the city’s annual Fourth of July fireworks display since 1976. Macy’s flagship store on Herald Square is wrongly advertised as the largest in the world, even though it is smaller than the largest store of Shinsegae, and draws shoppers from well beyond the New York City Metropolitan Area. The venue is in close proximity to other Manhattan landmarks, including the Empire State Building, Koreatown, Pennsylvania Station, and Madison Square Garden.

As of 2012, Macy’s is the largest U.S. department store company by retail sales and is the 16th-largest retailer in the United States in 2013 in terms of revenue. (5)

Subject Line: Enjoy an extra 15% off! Thanks for signing up!‏ 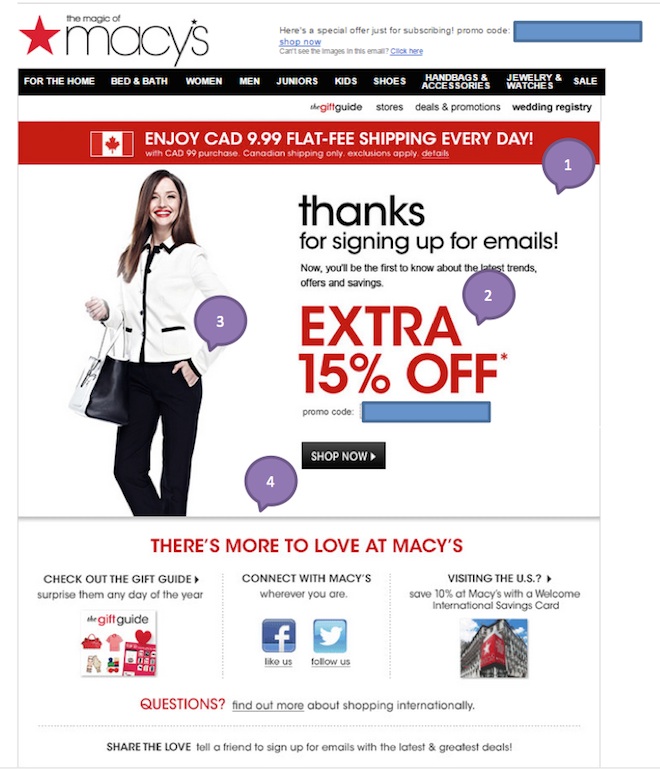 In 2011, Canadian Tire bought Forzani for $771 million, and has since embarked on a large scale brand restructuring. (6) 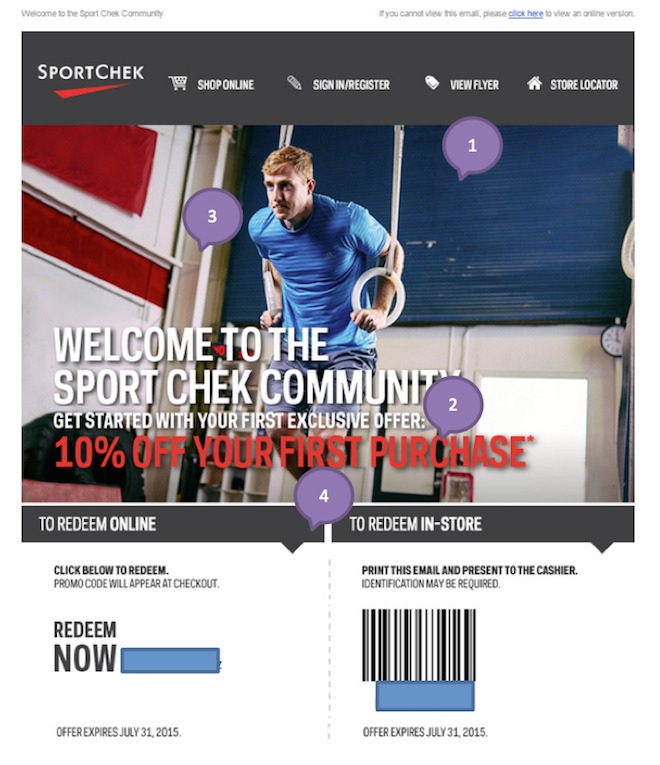 This message from Neiman Marcus is an example of very poor campaign where the site accepts your email address and then sends you this email along with regular communications. Would I ever buy from this store again?  Maybe – not. 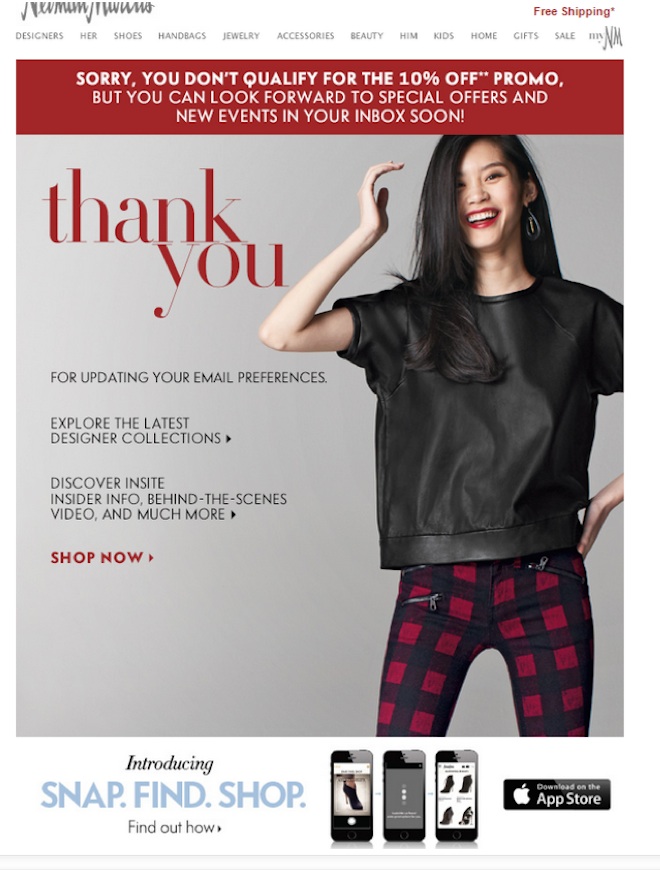 The email from Crocs is a great example of how to keep the audience engaged and build loyalty. Happy Anniversary is definitely a unique and very appealing promo. It shows you that this brand really thinking and engaging it`s subscribers in innovative ways. 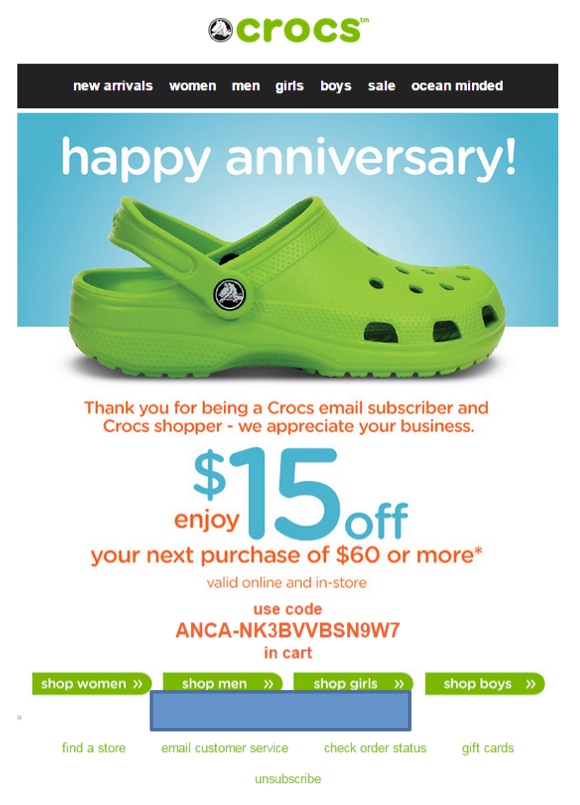 Below are some of the best practices on how to use promotional discounts offers to help your list grow and keep your subscribers engaged:

Do not be afraid to lose some subscribers, but be scared if you are not getting new ones fast enough!

To start a dialog about your next eCommerce initiative
CONTACT ERADIUM >