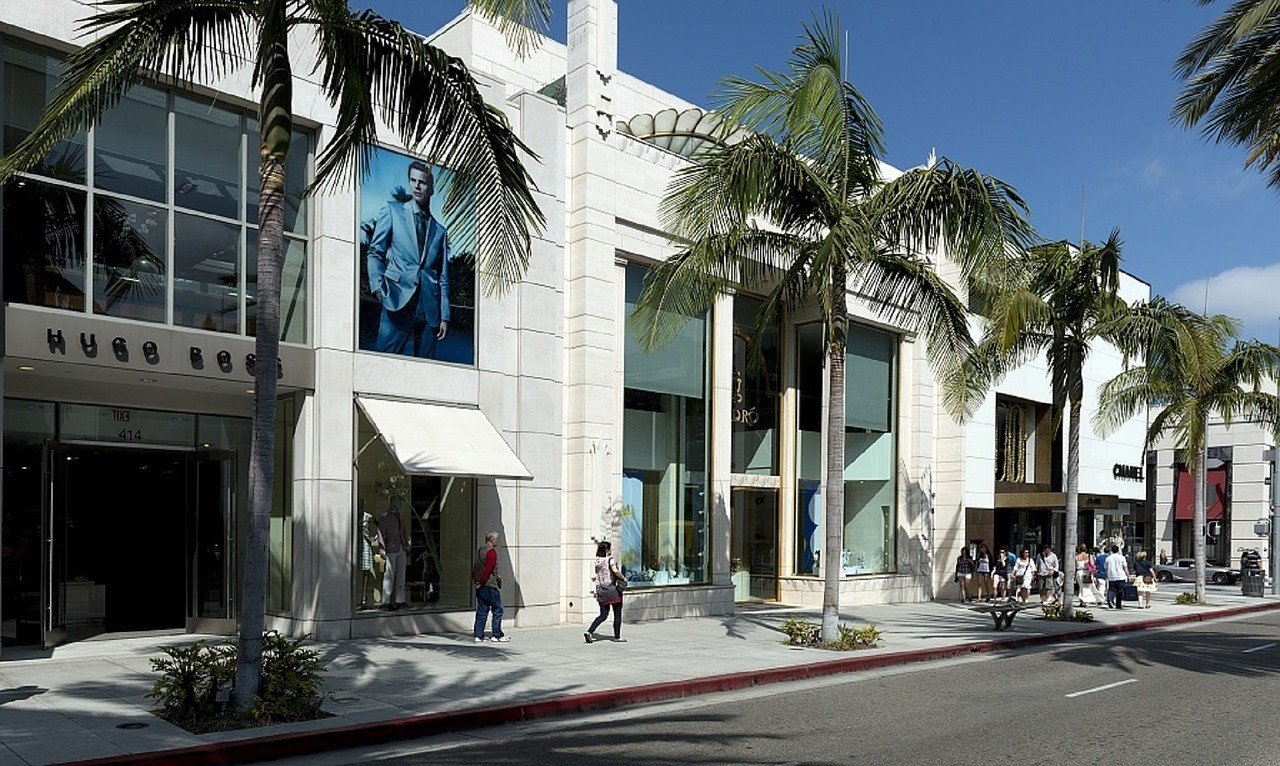 How Luxury American Retailers Use Email Marketing. Are things really better south of the border?

Luxury department stores have a life of their own. They do not follow the trends of the overall retail and “march to the beat of their own drum”.

Canada’s $1.6-billion luxury apparel market, at 6% of overall retail apparel sales. It has the relative market share less than half than its counterpart in the U.S. market and attributes it directly to the proportionally smaller amount of high-income earners we have in Canada relatively to the U.S. (1)

Marketing to the customers of these stores is an art of its own. Most traditional approaches will fail.

People who buy luxury products are most often have the following 5 traits:

How can these experiences be best transferred online when there is no human interaction.

Let’s review the three different campaigns to see how the retailers tried to connect with their affluent shoppers. Things are definitely not as rosy as one might think.

THIS WEEK WE ARE REVIEWING ECOMMERCE EMAILS FROM THE FOLLOWING RETAIL BRANDS: NEIMAN MARCUS, SAKS FIFTH AVENUE AND NORDSTORM. 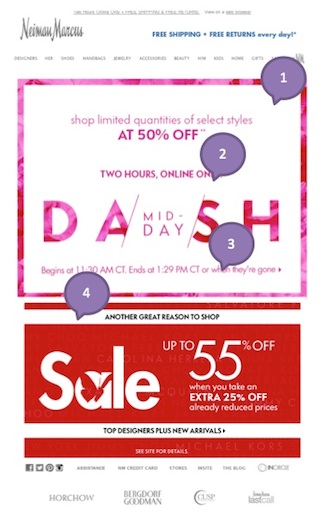 This type of an email is designed more for the everyday shopper who is really conscious about pricing versus the actual product they are getting.

This does not feel luxury and appealing towards the more affluent shopper. Perhaps it was intentional attempt to broaden the market to a wider audience. I would hope they took out the luxury shoppers from the email list when targeting the mass market. This type of campaign could diminish a brand.

Saks Fifth Avenue was the brainchild of Horace Saks and Bernard Gimbel, who operated independent retail stores on New York’s 34th Street at Herald Square in the early 1900s. Their dream was to construct a unique specialty store that would become synonymous with fashionable, gracious living.

The combined financial input of these great merchant families led to the purchase of a site between 49th and 50th Streets on upper Fifth Avenue, then jointly occupied by the Democratic Club and the Buckingham Hotel. With the opening of its founders’ “dream store” on September 15, 1924, Saks Fifth Avenue became the first large retail operation to locate in what was then primarily a residential district. By offering the finest quality men’s and women’s fashions, as well as an extraordinary program of customer services, Saks Fifth Avenue has become the byword for taste and elegance. 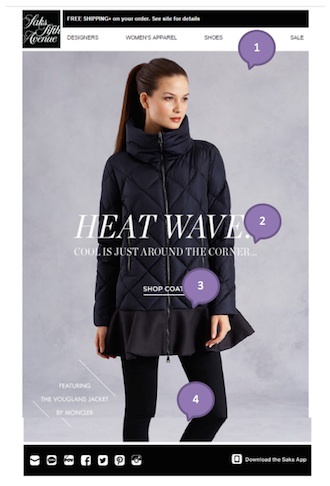 I am not sure why retailers insist that it is a good idea to market winter apparel in July. The affluent consumers who are not price sensitive will not look for winter bargains in the middle of the summer season. These types of shoppers will come in in the middle of November and buy the best and trendiest jacket at that time. They will never be seen in last year style just because they went on sale.

Sending a lifestyle shot of the trendiest summer or at least early fall product is more thought provoking for this category of retailers.

Nordstrom, Inc. is an American upscale fashion retailer, founded by John W. Nordstrom and Carl F. Wallin and headquartered in Seattle. The company began as a shoe retailer and has since expanded its inventory to include clothing, accessories, handbags, jewelry, cosmetics, and fragrances. Select Nordstrom stores also have wedding and home furnishing departments. There are 296 stores operating in 38 states, which includes 118 full-line stores and 178 Nordstrom Racks. Nordstrom also serves customers through Nordstrom.com, the newly developed e-commerce site nordstromrack.com, and its online private sale site, HauteLook. In addition, Nordstrom operates one clearance store, along with two Jeffrey boutiques. Nordstrom, Inc.’s common stock is publicly traded on the NYSE under the symbol JWN. The company announced plans to open six stores in Canada beginning in 2014, as well as its first namesake in New York City in 2018. Nationally, Nordstrom competes with luxury retailers Bloomingdale’s, Lord & Taylor, Neiman Marcus, and Saks Fifth Avenue, as well as middle class retailers such as Macy’s, Von Maur, Dillard’s and Belk. Of its luxury retail competitors, Nordstrom has both the largest number of store locations and the largest geographic footprint, and its stores anchor many upscale malls throughout the United States. 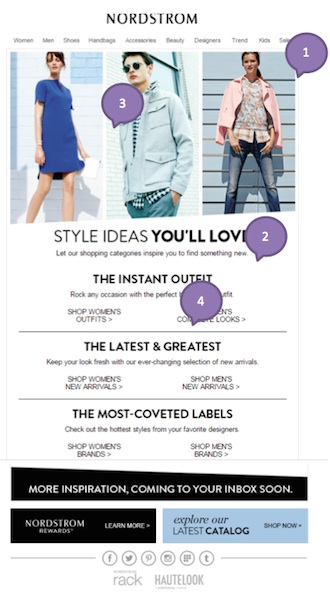 The email is trying to say a lot and not enough at the same time. The messaging is hard to follow and most importantly it does not display properly on the phone. Not sure how a luxury retail who knows that most of their customers are extremely mobile driven does not check their email on a mobile device? It is better to say less but making it work. Specific information on the products being showcased would definitely be helpful.

A winter sale in July? I really do not think that this type of sale can get much traction. Who wants to buy Christmas décor 6 months before the holiday? It is bad enough that you have to buy it in December but going Christmas shopping in the middle of summer, is really not fun. No matter how big the discount is. 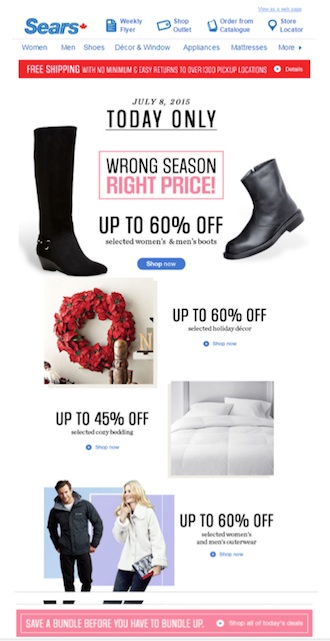 How to appeal to your luxury buying segment in 10 easy steps:

For Look and Feel